--
× This item is no longer available for purchase.
Active

The craft is of all fibreglass construction, built in the United States in 2009 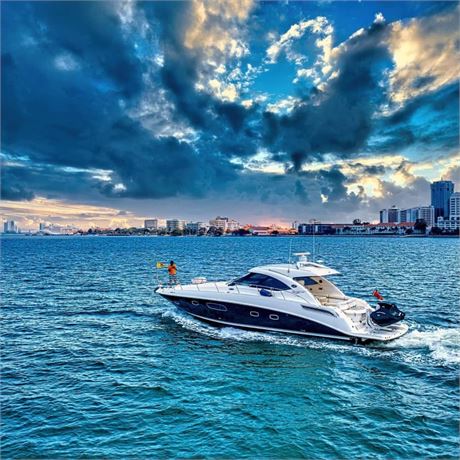 Payment Instructions
Please note: The buyer's premium is only due if you pay by credit card. If bank transfer no buyer's premium is payable. Typically, upon purchase of a boat, a letter of intent is signed and presented to the owner. Upon agreement by the owner a deposit of 10% is payable by bank transfer to BASCO's Client Account. Settlement terms is as per the Letter of Intent and Memorandum of Agreement. Please contact us to find out more.
Details
Description

"Gudu" is an extremely fast and maneuverable Sports Boat, 23 knots economical and 33 knots full throttle, was built in the USA in 2009 and  transported to Phuket shortly thereafter and since then has been berthed in Phuket or Penang with occasional coastal trips and as far as Singapore.

The Hull is fiberglass with a dark blue colour with two white stripes, Superstructure and Deck are white. Underwater lights are installed at the stern area.

The accommodation consists of two cabins complete with TVs, a large double bed forward whilst aft are two single beds with a spacer piece which enables the bed to be made into a single bed. The Master cabin has a separate wash-place and toilet whilst adjacent to the guest cabin the wash-place and toilet are tastefully combined. Carbon Monoxide sensors are installed in the accommodation.

A large comfortable saloon area capable of accommodating at least six people complete with a dual volt freezer/fridge, hot plate and a microwave. A discreetly hidden TV is installed with two stereo players. The two Cruiseair air-conditioning units below deck serve the saloon and the two cabins whilst the one Cruiseair in the cockpit serves that area. The fresh water is of a closed loop pressurized system for the saloon, both cabins, the sink aft of the cockpit and fore and aft washdown taps. A central vacuum system is installed. A dual volt fridge and BBQ are installed aft of the cockpit area.

The machinery is installed below deck and is accessed via a hatch by two 12 Volt electrically operated actuators. Machinery parameters are monitored by the Smartcraft system with readouts at the helm.

Two Cummins QSB380 engines are installed each coupled to a ZEUS drive with three and four blade counter-rotating propellers which enables the boat to be extremely maneuverable via a JOY stick. Both ZUES drives have been upgraded, Port in 2011 and Starboard in 2013 respectively. In addition, a proprietary system named “Skyhook” enables the boat to remain on station within 3 meters which is excellent whilst fishing atop a wreck or waiting to berth.

The boat has a CUMMINS ONAN 11KW generator enclosed in a sound shield in the engine room. A 220V To 110 V transformer is installed

The AC water pump is installed in the engine room, a spare pump is on board.

The boat has 12 volt and 110 volt electrical points.

The equipment is RAYMARINE as follows:

Three GPS, 1 for VHF, 1 for radar/chart plotters and 1 for the Smartcraft Interface.

-Anchor lifting/raising switches both locally and at helm

-Side Ventilation windows at helm, Sliding rooftop ventilation at helm

The craft is of all fibreglass construction, built in the United States in 2009. It is a standard Searay 470 Sundancer, without a fly-bridge.

Accommodation below deck comprises a double berth cabin forward, aft of which is the main saloon, galley and dining area. There is a second cabin aft, with a common toilet facility. The below deck section, as well as the conning position and cockpit area, are fully airconditioned as may be desired.

The machinery space is located beneath the cockpit, with access through an electronically operated hatch at the aft part.

Machinery consists of two Cummins QSB380 marine diesels of 474 hp each, coupled to ZEUS drives with three and four blade counter-rotating propellers. This allows the boat to be extremely manoeuvrable, with a JOY stick control.

The yacht was transported to Phuket shortly after construction and since then has been berthed in Phuket or Penang with occasional coastal trips, as far as Singapore. It has been regularly maintained and the owner has excellent records of the work done at various times.

With the yacht being both out of the water and afloat, it is possible to comment on the underwater fixtures and fittings, as well as all areas above the waterline.

While the yacht was out of the water, the underwater surfaces had been rubbed down and closely examined, with all paintwork removed and the hull then given undercoats ready for the application of anti-fouling. Prior to the undercoat being applied, no evidence had been found of any damage or damage repairs.

The underwater section of the hull was seen to be in excellent condition and undercoats were then applied.

The hull was then given three coats of black antifouling, prior to being placed back in the water. The drive pods and propellers having already been given coatings of Propspeed and new anodes installed.

Above the waterline the hull was noted to be in excellent condition, well-polished and with no evidence of any deterioration

Internally, as with most pleasure craft, a considerable amount of the hull is concealed behind linings, panelling and built-in furniture. However, in the machinery space and bilges, it was noted to be in good condition, with no deterioration.

While the yacht was on the hard, the underwater surfaces and fittings were thoroughly cleaned, ready for coating, while anodes had been removed for the installation of new units. The two drive pods were noted to have new Propspeed coatings and were found to be well secured and in first class condition.

The pods are each fitted with two contra-rotating propellers, the inner of which has four blades, while the outer has three blades. They were seen to be in first class condition, with no evidence of any damage, nor any sign of hairline cracks.

The yacht has underwater lighting installed at the aft part, which was noted to be in good condition.

A new anode had been fitted on the lower part of the transom, while the trim tabs were also fitted each with a pair of new anodes.

The yacht has a metal capped synthetic rubbing strake at the joint between hull and deck sections, which was seen to be in very good condition, with no blemishes apparent.

There is a built-in swim platform at the aft part, to which a new Presto L200 electrically driven jet-ski lift, has been installed. The swim platform was noted to be in good, undamaged condition and well secured.

There is a hatch at the aft part of the swim platform beneath which houses the stainless steel boarding ladder.

The decks and coach roof are of fibreglass construction and form part of the complete upper mould of the craft. The decks, forward, sides, cockpit and coach roof were noted to be in first class condition, clean and well maintained, with no evidence of any damage or damage repairs.

The yacht has a stainless-steel pulpit, with extended side rails back to the cockpit. This was noted to be in good condition and without distortion.

The stanchions were seen to be of the same quality and well secured to the deck, while the lower railings along the sides of the craft, were noted to be of stainless-steel wire rope and having stainless steel turnbuckles for tensioning.

There is a stainless-steel fairlead forward, to house the anchor. This was noted to be well secured and extends over the bow to help in preventing the anchor and its chain from contacting the hull. The chain leads back to a locking arrangement for safety and then on to a Quick winch. All items were noted to be fully operational.

The anchor is galvanised as is its 60 meters of chain.

The yacht’s mooring cleats, of high quality stainless-steel, were noted to be well secured, with no evidence of any movement.

The recently installed Presto lifters appeared to be in pristine condition, with indicator lights and all ancillary equipment working correctly. It should be noted that subsequent to installation, there were problems in respect of its operation. Testing was carried out under the instructions of the manufacturer, but movement remained erratic. There are further exchanges on-going with the manufacturer, but this installation remains as ‘work in progress’.

The yacht is fitted with two Cummins QSB 380, turbo charged, four-cylinder marine diesel engines. They were noted to be in clean and apparently, well maintained condition.

The owner appears to keep very good records of engine hours run and servicing and maintenance carried out. Below are the records from 2012, but it is understood that records have been maintained since the purchase.

The generator, a Cummins Onan of 13.5 kVA was noted to be in good, clean, well maintained condition, with ancillary equipment also in close proximity.

As with the main engines, this has been regularly serviced. The main DC breaker panel is alongside the generator and easily accessible behind the access ladder to the machinery space.

There is a Victron battery charger fitted alongside the generator and adjacent to this, is an electronic engine control panel. There are also control breakers at the helm, for various circuits, such as lights, anchor winch, pumps, etc. All noted to be fully operational.

Within the accommodation, concealed behind locker doors, are two breaker panels, one for DC circuits and the other for AC. Both were noted to be in clean, operational condition, with all switches working correctly.

The main battery bank was noted to be in first class condition, with no corrosion at the terminals. There is also a new spare battery, ready for use, should it be required.

Plumbing throughout the vessel was noted to be of good quality and well installed. Piping was noted to be of high quality, with joints all well secured. Beneath the accommodation, in the bilges, were manifolds for distribution to various places, all of which are in first class condition.

With the craft being fitted with Zues pods there is no steering gear, with the alteration of direction achieved by the drive mechanism turning, which is an integral part of the pods. The yacht is also fitted with a proprietary system name Skyhook, which basically enables the boat to remain on station. The operation is similar to dynamic positioning and is controlled by a joystick at the conning position.

There are no questions for this listing.